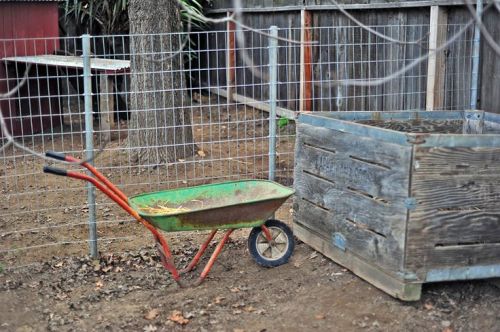 To your garden that is. Kitchen waste is also one of the biggest problems facing our city councils in tackling waste management. But if you compost, keep worms or backyard chickens, you shouldn’t need to throw anything organic in your green bins.

Come along to our third workshop of 2015 and learn tips for the perfect compost, and encouraging worms.

The workshop will be run by compost expert and waste separation consultant Kim Frankowiak and Kitchen Gardeners’ resident ‘chook lady’ Barb Frey, who will be sharing their knowledge on setting up a practical compost area using bought or recycled materials. Be prepared to get your hands dirty! We have some great compost to show off, with bin composters, worms, bokashi and more. Check out the pictures below to see the compost Barb and Kim have been ‘cooking’ up.

See what happened to this grapefruit! 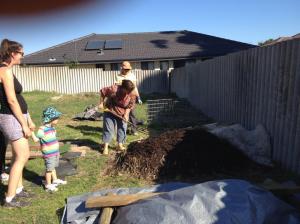 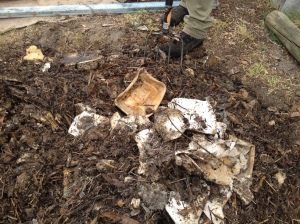 Kids are welcome – we’ll have some hands-on children’s activities happening in conjunction with the workshop if your child wishes to play, so please make sure they are wearing gardening clothes. You may like to bring little gloves too.

RSVP: We’ll be in a Bassendean back yard. Please RSVP via Eventbrite so we can have an idea of how many people to expect.

Venue: Barb’s place in Bassendean, address will be sent when you RSVP.

This project is funded by the Waste Authority through the Waste Avoidance and Resource Recovery Account.

Keep up to date and share tips with other Kitchen Gardeners.

Posted on February 2, 2015 by TT Guildford | Leave a comment

The first Kitchen Gardeners’ workshop, Jam in January was a huge success with a happy lot of ‘Gardeners’ leaving with one (or three) jars of delectable jam.

Bev Roseveare generously shared her recipe for black grape jam, perfect for the short grape season and a delicious accompaniment to toast or ice-cream!

We learned that berries including grapes don’t have much natural pectin – the ingredient in jam that helps thicken the liquid. This means berry jam is often more sauce-like.

We used jam setting sugar that includes pectin, but we also added a lemon to the pot to help the setting.

The pot early on

Meanwhile, Felicity ran the Kitchen Kids’ Club, its new members making the very beautiful labels for the jam that you will notice in the first photo. Thanks Felicity and the children for your creativity.

And we all shared tips, stories, a few laughs and even a glass of wine while taking turns stirring the pot. Thanks to everyone who made it along and helped with our message of sustainable living and eating in season!

Sharing tips around the jam pot

Finally, here’s the recipe for those who missed out. Feel free to add your tips in the comments section below:

Method:
– Cut all fruit and weigh it before putting it in a large pot. A little water can be added to the bottom.
– Measure out the sugar, kilo for kilo to the weight of the fruit (i.e. 2kg grapes, 2kg sugar)
– Add the lemon.
-Bring the fruit to the boil. Mash up the fruit.
– Once the pot has come to the boil, add the sugar one kilo at a time and stir constantly to keep it from burning.
– Bring the pot to the boil, then add the next kilo. Repeat until all the sugar is in the pot.
– Boil and stir on a fast heat for about one hour, or until the liquid has reduced by about half.
– For the ‘jam test’, put a teaspoon of jam on a cool saucer. Wait until the jam has cooled and run a teaspoon through the jam. If a skin forms, it is ready to jar.
– Jar in cleaned and sterilised recycled jars.

Posted on July 14, 2013 by Elizabeth LiketheQueen | Leave a comment

All the lemon trees are laden, their branches groaning under their loads and everyone looks pained at the thought of wasting such abundance.

Armed with about 30kg of lemons, the Kitchen Gardeners tackled the job at their July workshop, generously hosted by Barb.

They’re very simple to make and have lots and lots of culinary uses.

As well as the two recipes on the linked document, a quarter of preserved lemon rind, chopped finely adds a sophisticated undertone to beef casseroles and soups.

They’re lovely in chicken dishes and with fish.

Just don’t eat the flesh of the lemon, it’s horrible.  The rind is the good stuff!

Lemons are great to eat, but their uses don’t stop there!

This fabulous-looking gloop is a very effective – and sweet-smelling – household cleaner.

While we made ours up at Barb’s place using her thermomix, you don’t need one.

As it has no preservatives, it won’t keep long, so store it in the fridge, but make up little amounts so it’s fresh.

Lastly, with the aid of a dehydrator, we made spiced lemon salt. 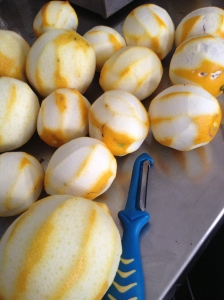 First peel your lemons, in this case 22 of them, and dehydrate.  They take about eight hours.  Don’t worry about the denuded lemons cluttering up the kitchen, we’ll think about what to do with them later…

Take a decent handful of dried lemon peel, a bit of salt and whole peppercorns, some fennel seed, coriander seed, fenugreek, dill seed or whatever other spice appeals and crush to a fine powder in a mortar with your pestle.

We tried this in a food processor, which mixed the components nicely, but didn’t crush them.  Then someone had a brainwave and we added fresh basil – divine as a rub for roast meat or over root vegetables.

Now how many people will be saving little jars and filling them with spiced lemon salt as Christmas presents?