Posted on August 8, 2012 by Transition Town Guildford | Leave a comment

Do you recycle? Do you compost? Do you support a ban on plastic bags?
We’ve created a quick online survey on waste and recycling to gauge where people are at, and to help guide the direction of the Transition Town Guildford Waste Group.
It’s only 13 questions, super easy and entirely anonymous. Only takes 5 mins.
Click here to take survey
Please fill it out, we’d love to hear what you think?
Also, feel free to forward to any friends and family who live nearby
We’ll send out the results when complete
Advertisement

Over 40 people came on the 4th of March for Transition Town Guildford’s second Clean Up Australia Day. Many hands make light work, and it was a massive success.

We managed to collect 24 bags of rubbish & 18 bags of recyclables!

Not to mention the numerous oddities as well, such as road cones, bike tires, a number plate, a sewing mannequin and even a NZ passport!

While it was a good sign that there weren’t so many large bulky items as last year, there was still plenty of rubbish to collect. However, it was disappointing to see how much recyclable material there was. Several people brought up the solution of a container deposit. The Conservation Council has an ongoing campaign to introduce a 10 c refund, copying the successful model from South Australia (you can support it here).

Thanks to everyone who came and took part, especially all the kids from Guildford Primary.

Some of the Guildford Primary kids 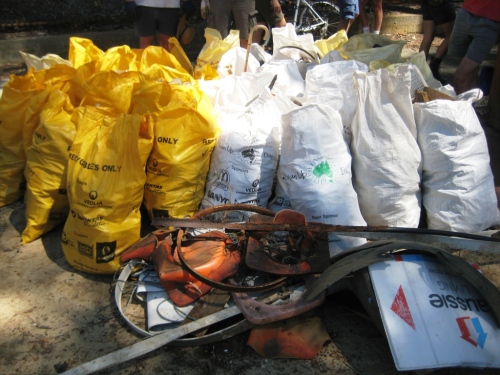