Last Thursday I was once again a guest of the East Metropolitan Regional Council (EMRC) with another information session for their proposed WWTE Plant in Hazelmere. Previous attempts to woo the public have failed, resulting in the EMRC being forced by the Environmental Protection Authority (EPA) to carry out a full, Public Environmental Review (PER) of the project. This time around was a little different. Previously the proposal was to build a Pyrolysis plant yet now there is no mention of the term “pyrolysis” in the promotional literature. Confusingly, this isn’t the first name change for this type of operation. Back in the days of “plain-speak” they were called Incinerators. When that term (and the air) became toxic to the public they were renamed as Pyrolysis Plants (based on the technique of heating materials in the absence of oxygen). After another public revolt it has been repackaged as WWTE, or Wood Waste to Energy.

On the surface, the PER document is relatively inoffensive. It reads more easily than the previous version although you still might need a degree in chemistry to fully understand it. The proposal seems to be rational and well argued. The EMRC has a vast stockpile of wood waste, mainly from building projects that it wants to “recover” the energy from by cooking it in a kiln and then using the gasses generated to run gas turbines that will then generate electricity. Scrubbers in the smoke stack would extract almost all of the toxins generated and several thousand houses would receive Green electricity from a renewable resource, a resource that would otherwise be dumped in landfill.

A lesson in history and hair-splitting

The EMRC had promised residents some years earlier that they would not build an incinerator in Hazelmere. The EMRC now claims that this is not an incinerator as it does not burn or combust material: it gasifies it. This really is a matter of semantics. The process heats wood to around 600 degrees in the absence of oxygen, producing a flammable gas that is then combusted (aka incinerated) in a gas turbine. Even though it is a two stage process it still means that the wood is burnt/combusted/incinerated.

The EMRC has indicated that they have a “large existing market for wood chip fines and a smaller market for wood chip”. At the meeting a commercial chicken grower spoke effusively about the value and quality of wood fines (the finer particles after the wood stock has been ground) supplied to his business by the EMRC. My understanding is that it is the coarse chips which the EMRC is having difficulty selling. A logical step would be to run the coarse chips through the grinder a second time, thus generating more fines to fill the “large existing market”. There are also many other uses for the coarse wood chips. These include chipboard, structural beams, mulch, and soil stabilisation. Despite all this, EMRC Chairman Alan Pilgrim is quoted in this week’s Echo Newspaper as saying that there is no market for shredded wood and that if the plant did not proceed then the only alternative was landfill. This burn or bury policy is a tragic indictment of the EMRC and a far cry from the reuse/recycle policies it once championed.

It is a requirement of both the EPA and Waste Authority that the waste sourced as input for waste to energy plants must target genuine residual waste that cannot feasibly be reused or recycled. The EPA and Waste Authority support the Waste Hierarchy which classifies the treatment of waste from prevention as the most desirable down to dumping in landfill as the least. Waste Hierarchies usually look like variations of the one shown below.

Energy recovery is the process being touted by the EMRC. This is one of the least favoured options because it destroys the resource so that it can never be used again.

A Detailed Assessment of Air Quality and Movement for Public Safety

The EMRC states that they have carried out detailed modelling of air movements and air quality to ensure the safety and wellbeing of those living around the plant. This is in fact true…..except that they did the modelling at their Red Hill site, a breezy area on top of the Darling Scarp, surrounded by bushland. Red Hill is 16 Km from Hazelmere which is located on the Swan Coastal Plain, has dense residential housing, and has frequent temperature inversions in winter which trap and concentrate pollutants at ground level. Illogically, the EMRC believes that air movements in Hazelmere will be the same as they are at Red Hill. Their unwillingness to carry out a detailed local study implies  just how little the EMRC cares about the health of Hazelmere residents.

What is Already in the Air

Hazelmere and surrounds already bears a large burden of polluting industries in the form of several brickworks, plasterboard manufacturers, and a rendering plant, not to mention the significant flight path from Perth Airport. When introducing any new polluting industry to an area it is important to assess what is already in the air so the cumulative effects are known. But the EMRC report states “The project timetables have not been sufficient to enable background air quality data to be obtained at the specific proposal site”. Local residents should not be exposed to risk simply because the EMRC has not allotted sufficient time to assess the air pollutants and the damage which they might incur.

There are a raft of other inconsistencies in the report and presentation from a lack of detail on how feedstock is going to be sorted to avoid contaminants to the ease with which feed for the plant can be changed from clean wood to mixed waste with a works application to the EPA. The EMRC asks us to trust that it will act in our best interests however they seem to have no interest in earning that trust by being forthright, clear and thorough in planning this project.

Many residents in Hazelmere, Guildford, Midland, South Guildford, Bassendean and Woodbridge are just sick of being used as a dumping ground for the waste and excesses of the rest of Perth. Yes, we are all part of the problem when it comes to generating waste. Sadly, the imagination of the organisations that we employ to manage this waste can’t seem to stretch beyond the idea of Burn or Bury.

The EPA will shortly be considering the EMRC’s application to build this incinerator in Hazelmere. If you would like to view the Public Environmental Review written by the EMRC for this Project you can find it here:

If you feel that it is not appropriate for this plant to be built in Hazelmere then you can lodge a submission with the EPA regarding this through the same web page.

As a local community group, Transition Town Guildford was recently invited to a presentation by the East Metropolitan Regional Council (EMRC) on their proposed new Resource Recovery Park for Hazelmere. Waste and Recycling sub group members Barb Frey and myself attended. I was initially concerned that “Resource Recovery Park” might be PC-speak for “Rubbish Dump” and Hazelmere has had more than enough of that in the past. What followed was a plan for a recycling and power generating centre that appeared to be state-of-the-art though it does need some fine tuning.

Here are the basics:

Just northwest of the junction of the Gt. Eastern Hwy. Bypass and Stirling Crescent. 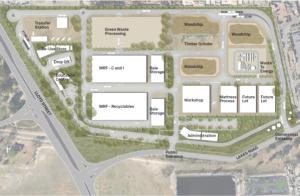 We did raise concerns about increased traffic congestion in an already strained area with large numbers of trucks trying to access the site. EMRC said they will carry out a full traffic study before construction. The current plan relies on access from the Lloyd St extension which is nowhere in sight. Another possible access is directly off the Bypass.

Mattress recycling. Mattresses are diverted from landfill and stripped/recycled.

Wood is to be shredded and fed in to a pyrolysis plant. Electricity is generated by wood being heated and the gasses burnt to run a generator. 11000 tonnes of wood is expected to be burnt to produce 3MW of power annually. This would power 3000 homes. BioChar would be produced as a by-product. EMRC has yet to receive environmental approval for the pyrolysis plant.

Kerbside rubbish collection material will be sorted and recycled.

Kerbside green waste will be shredded then sent to landfill. This seemed like a real waste of mulch. We suggested the mulch should be made available to the public.

This is the best (in my view) bit. The EMRC will run a tip shop at the site where still useful collected items will be sold to the public.

To educate the public on recycling. Very worthwhile!

Most of the construction is expected to be completed in the next 2 years.

All told it was a good presentation. There are a few bugs to iron out but we appreciated that the EMRC was consulting with the community as part of their project planning.

Posted on February 21, 2013 by Transition Town Guildford | Leave a comment

Building on the success of previous years, Transition Town Guildford and the Guildford Association will be hosting a Clean Up Australia day site around the Guildford Primary school (125 Helena street).

Come join us to clean up and hang around for morning tea. Children welcome, but must be supervised by parents.

Bring your e-waste along this weekend (23 and 24 February) to one of the Tech Collect locations to have it recycled for free. All computer equipment and accessories, cables, printers, scanners and TVs accepted.

And on the 9th of March the City of Swan are having another Recyclable goods drop off day. See the Upcoming Events page for details.