Posted on April 29, 2013 by Transition Town Guildford | Leave a comment

For the long weekend we had a nice relaxing time down in Pemberton, about four hours south-east of Perth. Upon our return I found quite a few cucumbers a good size for making my first attempt of dill pickles! Thankfully today my order from OzFarmer.com arrived that contained lots of wonderful things I needed to make my pickles, so I got cracking!

I didn’t have a huge amount of cucumbers, probably about 15 small to medium, but I didn’t want to leave them on the vine any longer as the plants themselves seemed to have died off with what looked like a while dusting of mold on the leaves while we were away, and I wanted to get some pickles out of them before they died completely. I’ll have to do some more research on what this might be, there did seem to get a lot of aphids and ants on the cucumber plants while they were growing, which I did try to deal with some organic pest control, but it didn’t seem to do a huge amount of good.

This was the harvest mid clean. Not a huge harvest, but still better than none! I had intended on putting the cucumbers in two 1 litre jars, but upon packing found I had too many for just one, and too little for two, so I decided to use the beautiful smaller blue vintage ball jars I ordered and that has just arrived that day. I also used a Kosher Dill Pickle pre-made spice that also had something to make them extra crunchy, along with some vinegar and water and brought that to the boil. Then in it went and back into the boiling water canner for 15 minutes. All three of my jars got a nice loud pop when sealed, so I was happy. 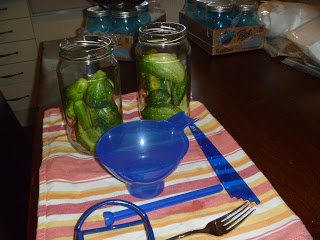 These were the large 1 litre jars packed but not full enough. How annoying. But these things happen, so we persevere! I did have the chance to use all my new fancy canning equipment seen above, which made canning so much easier!

These are the three smaller jars packed with pickles shortly before adding the brine. I think I could have packed them a bit tighter as once the brine was in them they all floated to the top of the jars, so you could see how much space was left in the jars, but a lesson well learned I guess, I didn’t want to over pack them.

Finished product! Three little beautiful jars of homemade pickles! I am so going to get some more of these blue vintage inspired ball jars in different sizes as they are so pretty! Will make storing my canning jars more of a work of art rather than just trying to shove my jars somewhere out of the way! Maybe I’ll put in a high rail all along the kitchen and sit them up there until I use them…. We’ll see what Dave thinks of this idea. 😉 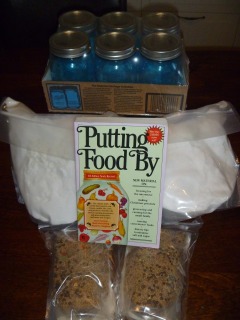 The haul from OzFarmer.com, my beautiful blue jars, enough canning salt to last until the apocalypse, pickling spice and the very helpful book of Putting Food By. New bedtime reading methinks!!

By Steering Member Kim Farnell, first posted on her own blog Barbaloot Suits and Garden Boots. We look forward to hearing what they taste like! 🙂