The pigness of the pig – Joel Salatin

If you’ve seen Fresh, Food Inc or any of the recent movies on our failing food system, you’ve probably seen Joel Salatin. He’s the charismatic USA farmer who’s got radical ideas on how to transform the way we produce food, and he’s put it into practice at Polyface farms.

As a self-confessed ‘Christian-Libertarian-Environmentalist-Capitalist-Lunatic Farmer’, he’s an interesting character. I was lucky enough to hear Joel speak in Byford in late 2012 and here are a few of his insights.

Many will be aware that our food system has become unsustainable, nutritionally lacking and actually unhealthy. Modern agriculture has become captured by a ‘fatter, faster, bigger, cheaper’ mentality.  As Joel pointed out

Key to Joels method of farming is mimicking nature. He asks, “What’s nature’s template? How can we adapt and use it?” For example, all large grazers in nature are mobile and move in herds, followed by birds – think of buffaloes or deer. Therefore, he treats his cattle or ‘sauerkraut vats’ like buffalo. He moves them every day and allows them to feed in only a small area constrained by mobile electric fences. This ensures that they eat all the forage and not just the tasty palatable species. It also means that the grass lays dormant for much of the year and can regrow, recover and seed.

Following the cattle, Joel brings in hens in egg mobiles. The chickens pick through the cow pats and help to sanitize and spread the manure. While this farming method is more labor intensive, that’s actually a positive, it provides more employment. It’s also more financially viable. With multiple products and incomes stacked on top of each other, his farm produces several times the income per acre of his neighbours. Ultimately he’s not just a grazier or a chicken farmer, he’s a “Grass farmer”. 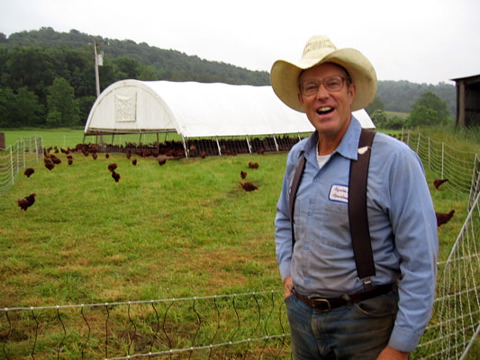 Joel with chickens behind super lite and portable electric fence

Following this approach, his pasture has improved considerably. He went from 1% organic matter in the soil to 8%! Therefore his soil has much greater water holding capacity.

While many of the ideas Joel promotes are aligned with Permaculture (e.g. aim to keep water as close to where it falls for as long as possible), he doesn’t call it that. Some more of his principles:

He was one of the most authentic and funny presenters I’ve heard, but what I also really liked about his workshop was that it wasn’t just about farming, it was really his philosophy of life. For example, talking about expensive farm equipment, “We capitalise our lives thinking it makes us free, but it enslaves us to that paradigm, financially and mentally”.

He also covered poultry and rabbit sheds, farm hand over, interns, marketing, sales and more. If you’re interested, you can listen to an audio recording of the entire day courtesy of Peter McMullen and Permaculture West (note 5.5 hrs).

Thanks also go to Heenan Doherty who brought him over. If you’re interested, they also sell the light weight electric fences Joel uses.

2 responses to “The pigness of the pig – Joel Salatin”