Have you noticed how cheap clothing items are these days?

The other day I picked up a Target catalogue and couldn’t help but notice how cheap pants, tops, and shoes were. Target prices were rivaling the local op shop prices. How was this even possible?

Fashion writer Clare Press asks a similar question in her book ‘Wardrobe Crisis: How We Went From Sunday Best to Fast Fashion’:

“How is it possible that we can buy a brand new garment, even one bedazzled by hand with sequins, for less than the cost of a cooked breakfast?”

After all, it’s not like a robot cut and stitched the clothes you wear. People do this. 60,000 people in fact. It’s one of the most labour-intensive industries on the planet.

The people who make our clothes often live in far away places and work in dangerous conditions. Most of the time they work in a factory line focusing on one tiny part of an item (e.g. a button hole) for long hours and for very little pay. That’s how you get to buy a brand new t-shirt for less than a cooked breakfast.

Fashion cycles used to coincide with each season but now fashion retailers bring in new clothes every month and some places every week. For example, fashion giant Zara brings in new clothes twice a week. It’s not surprising Australians send more than $500 million worth of clothing to landfill each year.

Fast fashion has created a ‘buy and toss’ culture where it’s normal to only wear an item once or twice before throwing it out.

Who can keep up with that? I certainly can’t.

Does this mean surrendering yourself to a lifetime of daggy clothing and looking like a relic of the past?

No, but you can choose to play a different game that is less damaging to people and the planet. This is the game I’m choosing to play.

I’m playing a game that values the materiality of the clothes I wear.

I’m playing a game that involves dedicating my limited time and energy to the things that matter most: strong relationships, community connection, good physical health, personal growth, and a healthy environment. If I’m shopping for clothes, it means I’m not hiking, reading, cooking, or writing (all activities I thoroughly enjoy and value).

I’m not up for continuously going shopping for clothing because I know it’s a trap. How do I know? Because it was only a few months ago that I found myself caught in that trap.

Back in May, I traveled to Japan not for a holiday but to say goodbye to a relative who was dying of cancer. It was probably the saddest and loneliest 4-weeks of my life.

To pass time in the evenings, I would visit the shopping centre opposite from my hotel (Sea Mall) and walk around for hours looking at the different clothing stores. It was a great distraction. It was easy to do. Like I said, I was lonely and sad. Over the 4-weeks, I spent hundreds of dollars on clothes and shoes.

The one thing I noticed is that the more I bought, it was still not enough and I wanted to keeping buying more. I was never left feeling satisfied. I would say to myself, “This will be the last t-shirt I buy. This is it. No more clothes after this!” but it never was the last item. I kept going back for more and more…

As Clare Press explains in her book:

“There is such a thing as too much. And too much rarely makes us feel good. You binge; you get a hangover”.

The Antidote to a Clothing Addiction: Community

I had a clothing hangover. The only thing that stopped my shopping addiction was coming back to Australia. Once I was back in my community and involved with Transition Town Guildford, my desire for new clothing disappeared. Being back with friends and family, my core needs were met, which a t-shirt could never satisfy.

Now I was interested in helping others to avoid the trap I had fallen into. Thankfully, I wasn’t alone and other members of our community group were keen to do the same. 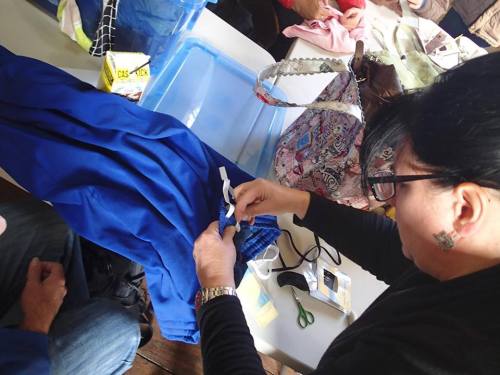 An experienced seamstress helps a man fix some pants

Experienced seamstresses came together and assisted people to mend their clothing items at this event. Socks were darned, buttons were sewn back on, pants were fixed, and holes were patched up.

There was something quite empowering about fixing a shirt that I thought was destined for the local op shop or landfill because of a small hole.

From this event it was clear that learning basic mending skills is a powerful way to disrupt a ‘buy and toss’ culture that has become normalized. 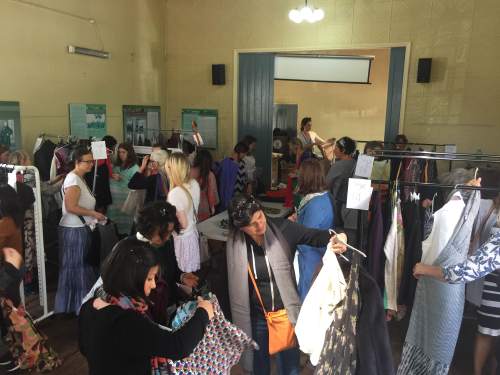 Swapping (not shopping) for clothes

Why a clothes swap?

We figured swapping could stop shopping. And since the average woman wears only 40% of the clothes she owns, we thought there will be plenty of clothes to swap in the community!

Some people have asked “But why not donate your clothes to an op shop? Don’t the poor people need them more than you?”

But the thing is op shops are drowning in clothing. They can’t handle all the clothes we donate.

In fact, 30% of clothes donated to op shops in the UK, US, and Canada get shipped by the bale to Eastern Europe and Africa. The Salvation Army’s tip fee is $3 million a year in Melbourne. So we figured it was time to give the local op shops a breather.

Don’t get me wrong, op shops are good, but they need to be a last resort for our unwanted garments.

So how did the clothes swap go? Well, it was a great success!

40 women and girls attended our clothes swap party. Most came with 5 items to swap. In exchange for their clothes, we gave them buttons. This was their currency (1 button = 1 item).

We provided food and drink for our clothes swappers while our team sorted out the clothing onto the right racks. Then the swapping began.

I had concerns: would it be like the post-Christmas sales? Would a feeding frenzy ensue? What if people started fighting over a pair of shoes? But everyone was well behaved and courteous.

The feedback online has been overwhelmingly positive. People have asked if we will run both events again. Most likely we will.

Through hosting the clothes mending workshop and a clothes swap party, Transition town Guildford is trying to shift people’s relationship to fashion, from being one that is short-term to one that is more sustainable and long-lasting.

If more community groups start to host events similar to these, perhaps we stand a chance of slowing down the frenzied fashion cycles. At the end of the day, if collectively we don’t buy into their game, they (the big fashion retailers) won’t be able to keep playing it.